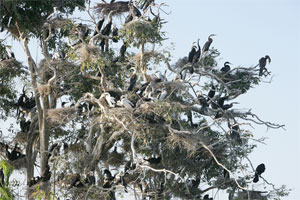 The main focus on birds have 2 places right now for doing boat trip overnight sightseeing with local lives and less tourists doing this tour, one is on Tonle sap lake , and the site is critical for the survival of several species of endangered water birds. The projects of Osmoses aims to link the preservation of the water bird colonies and the environment to the sustainable development of the local communities. In addition to saving seven bird species from extinction, over 130 families from the project.

The Prek Toal is one of three biospheres on Tonle Sap Lake and the establishment of its bird sanctuary makes Prek Toal the most worthwhile and straightforward to visit. It is an ornithologist’s fantasy, with a significant number of rare breeds gathered in one small area , Including the lesser and greater adjutant storks, the milky stork and the spot-billed Pelican. 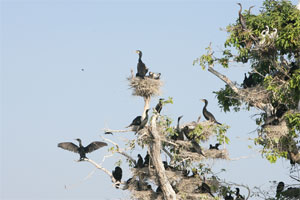 
One part of good sightseeing overnight with floating village and Bird nest with sunrise or sunset and the other bird place are at
Trapang Thmor in Banteay mean Chey province in Phnom Srok district around 2 hours by taxi cab or 4wd from siem reap so the kind of this birds call Grell birds the last of their lives in the world have only in Cambodia that birds conservation said.
For tour going to bird sanctuary and Prek Toal just mail to ask our information and I will give you the best quotation of the tour going there.

The prices included: Transportations from guesthouse or hotel to boat ,Entrance fee

This is actually not in Sisophon in chom district and see one pavement small road on the right to north and you would get there in nice road and villagers and one direct road more is pumpy and difficult but you can go after one kralanh bridge called spean trapoun bridge and turn right you can reach there too and quite nice passing through green villages as well, our taxi driver know the direction and location very well. It's a two hour 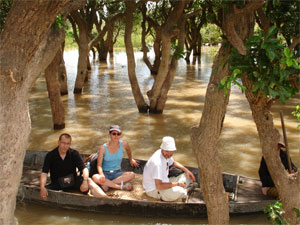 drive from Siem Reap, but closer to Sisophon then Siem Reap.
we used to go there many times with family or many customers stay at Jasmine lodge guesthouse which I can really recommend when you want to do something organised, but not something mainstream in Northern Cambodia. Two things though: you have to love nature, and in particular: birds. I'm more of a general nature-lover, and the bird-watching was fun for most part, but I'm not really into it.
I did not went on their regular daytrips, but on one of the guide training trips, so I was basically in a car with seven of Cambodia's top birdwatchers. I quess even seven of Cambodia's only birdwatchers. Cambodians are generally not very interested in nature, they polute it, so these were some unique people.

And very nice people too. The trip was organised by an American professional birdwatcher/dentist that lived in Cambodia for a few years now.
The trip was real fun, only started really early at 5am. Then we drove two hours to the reservate, which is actually from the Angkorean times, but was abandoned and discarded. Pol Pot successfully opened up the reservoir again, causing a lot of people to die in forced labour. The reservoir has a lot of birds (ofcourse) and a lot of rare species sometimes show up there.
It was so funny to be in a car with so many birdwatchers. They see something flying miles from you and they can tell you exactly what bird it is, if it's a female or male, and where it comes from. At that point I still hadn't spotted the bird! And that while bouncing on Cambodia's famous unpaved roads.

Amazing people. Most Khmer just want to live in Phnom Penh, drive a shiney moto and watch television. These guys only want to watch birds!!
The Sam Veasna Center is a really good organisation if you want to participate in eco-tourism. They organise trips to remote villages in the dry season, and give them a chance to make some profit out of it. In the rainy season they often go to these villages and offer them training and workshops. they are also the only eco-tour operator that Wildlife Conservation International allows in their parcs. Sorry for the advertising here, but this is not only a commercial organisation and I hope it's allowed in this contexto .

is a protected area of Cambodia on the site of a large Khmer Rouge irrigation project built during the 1970's. The sanctuary was gazetted on the 1st of January, 1999 and covers an area of 10,250 hectares. The reserve was set aside to protect the rare Eastern Sarus Crane (Grus antigone sharpii). Prior to the discovery of the crane at Trapaing Thmor, there were thought to be fewer than 1,000 of the birds left alive in the world
The Crane sanctuary is located in north western Cambodia, not far from the border with Thailand. The entire 10,000 hectares of the protected area is contained within Phnom Srok District of Banteay Meanchey Province. Phnom Srok district shares a border with Siem Reap and Oddar Meanchey Provinces. Reading from the north clockwise, Phnom Srok borders with Banteay Ampil and Chong Kal districts of Oddar Meanchey province to the north. The eastern border of the district is shared with Srei Snam and Kralanh districts of Siem Reap province. To the south the district shares a border with Preah Net Preah District of Banteay Meanchey. The western border of the district joins with Svay Chek and Thmor Pouk districts also of Banteay Meanchey. The sanctuary can be accessed by road from Sisophon (70 km) or Siem Reap (city) (90 km) via National Highway 6 initially then via smaller unsealed district roads to Ang Trapaing Thmor.
The site of Ang Trapaing Thmor reservoir is also the site of an ancient Angkorian caus
The Sarus Crane, Grus antigone is an all-year resident breeding bird in northern Pakistan and India (especially Central India and the Gangetic plains), Nepal, Southeast Asia and Queensland, Australia. It is a very large crane, averaging 156 cm (5 ft) in length, which is found in freshwater marshes and plains.Ang Trapaing Thmor sanctuary is also an important conservation area for a number of other threatened species. One globally threatened primate species, the Long Tailed Macaque (Macaca Fascicularis) is found within the sanctuary. One globally threatened ungulate species, the Eld's Deer (Cervus Eldii} and three globally threatened turtle species, the Asian Box Turtle (Cuora )

On the way to visit the Ang Trapeang Thmor commune in Phnom Srouk district.i was really happy to recommend you to visit my grand father house projects(pteah ta kyoum school as wel in kralanh district in sompov lourn villagel.it is the  school just started to open in January in one rural and further from Siem reap town and are needing some books and pencils donations.