After you have had Cambodian visa you just walking around 5 more to the east you will the arrivals sign and then bring your passport to show them again for checking in Cambodia.

taxi share so please looking for one hotel name Lihout on the right side and over the bus shuttle bus terminal many taxi are parking over there.The Advice: Avoid from mafia boys and the children pick-pocket, Do not take free shuttle bus in Cambodian side to bus station and they will do overcharged the price of taxi and bus because they do rip off for their own pocket so better take taxi your own  only $10 for one person shared and whole taxi is $40 or 1200 bath only 3 hours to Siem Reap one taxi

can put 4 people Many taxi in Cambodia side in one hotel name LYHOUT after roundabout on the right hand in Cambodia side after check in Cambodian terminal. Also, for some tourists crossing the border, the mafia boys at border try to ask you about visa, bus, taxi and money exchange and all  their best to make you change money from $US to Thai money and Thai money to local money in riels and telling you there are no ATM and bank in Siem Reap, and Siem Reap in Angkor Wat don’t use Thai money, so they have to change to local money and then you will get bad rate and lose much money. So please take care!

Note now:All taxi drivers brought tourists from Bangkok,border(poipet) bus station to siem reap recently do not bring you to the guesthouse you had reservation.most of taxi drivers take customers some garage and telling you this is the bus station and then pass you to tuk tuk driver instead scam you around to some hotel and budget higher price and make commission and other taxi drivers will call to tell tuk tuk drivers waiting for transfering  you free of charge to any guesthouses and hotels that you have had reservations instead and additional more taxi drivers intend to tell you a lie that his taxi can not go inside the city.one more thing if you ask him or call to guesthouse and hotel you had reservation, he said yes and then put number of his tuk tuk driver mates and talk to you instead.afterwards he said to you . guesthouse you prefer to go  is full!!

One story more i just got from my customers.they already booked my hostel and they are taking bus from bangkok and then the bus drop them off at tuk tuk station and the tuk tuk drivers asked them if you have reserved the rooms some hostels and hotel please give me your paper and then he took phone and called and then tuk tuk driver said will bring him to there but he bring to his guesthouse and it is wrong guesthouse not the guesthouse that customers have reservation and also they did not look at sign and next morning they know they scam them to different hostels.

*Our service pick up customers from Poipet to Siem Reap*
A private taxi car seating up to 4 pax USD45.
In order to arrange your pick-up from Poipet to Siem Reap, please also notify us the following details at least 3 working days prior to pick-up date the following details:
Every passenger's full name as appeared in their passport, passport number, Nationalities, gender and expiry date of passport.

Most of taxi and motor drivers at airport embroider the cardinal numbers on their green uniform-shirt and all of drivers have their own turn get tourists from the desk accountant from airport.After tourists have bought taxi or motor and mini van transports from them to Siem reap town and then they try to drive tourists to some hotels or guesthouses with  high commission if you already have guesthouse or hotel reservation they will try to talk to you like the guesthouse you have reserved is ( far away from city, and not nice or it can be aready closed, i do not know where this guesthouse is and please go to see this one I know) if you will not listen to them the driver will drop you off in the area far away from city even telling you a lie there is the city of siem reap.
They will hassle you asking about the tours to Angkor wat with them in expensive price again and again and if not they will say piss you off and fuck off at you....! So please arrange someone going to pick you up in advance after you have reserved the rooms in which guesthouses and hotels before you are arriving in siem reap airport.it is much better.and above photos they are the photos of accountant you buy taxi association and the car with number on both side.

The road : now the road is paved from Poipet to Banteay meanchey province(Sisophon) to kralanh district around 130 kilometres and more 54 kilometres more has been paved right now our government already have spent more than 75 millions $us.

Many bus companies and travel agencies in Thailand sold bus tickets to Siem Reap and told lies to tourists that the bus will be in Siem Reap at 6 pm and going to drop off in bus station. All tourist busses never take tourists to drop off at the bus station because the Bus company like Neakrohorm Tour, Khmer Thai border tour, Angkor Amazing Holiday Tour, Hang tep tour, Atta Tour at Poipet running bus to Siem Reap and return to border the next morning have  a good deal contraction with owner of guesthouse giving first  $1000 for deposit and afterwards all these bus comapany with touirsts will drop of tourists in the guesthouse working with them. $6 for selling tourists between travel agencies and guesthouses.  Also the guesthouse in Siem Reap will have to send one guesthouse's driver who has experienced staying on the bus to ask tourists about the guesthouse  if they know tourists on the bus already have made reservations at the other guesthouses, they will tell bus driver to leave late from border and stop many places on the way. However make tourists cross and sleepy and then bus come to Siem Reap late at night and push tourists to stay their guesthouse.

Bus from Phnom Penh and other provinc 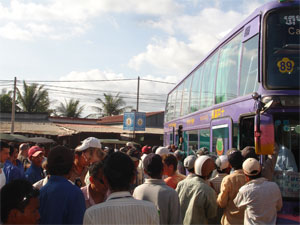 es to Siem Reap not going to drop off in the bus station also they always have their own bus station company and drive customers in to their place and close the door (allow only scam tuk tuk drivers who pay money having rights) to ask customers driving to hotels and guesthouse and if you will have guesthouses you made reservation already they will charge you more expensive and sometime they said they will not know that guesthouse and if they know they will say (really far away from town and try to kidnap you to other place with commission and more expensive or drop off far away from Siem Reap  they fight each others for taking tourists to  hotel and guesthouse because some of hotels and guesthouse do not advertise and associated to hotel and guesthouse association and just only deal with drivers bring tourist to their place for example the price only $5 can be up to $8 or more than this prices because the prices have to ask  driver first who bring tourists in to guesthouse or hotel even more drivers can scare to the receptionists in the guesthouse do not talk to their customers about the prices and do not write the reall price on board .